A touching overview of an important aspect of Burns’s life beyond his poetry and song by project Research Associate, Dr Carol Baraniuk

In transcribing Burns’s letters and those of his many correspondents from manuscripts it’s fascinating to be confronted with the wide circle of acquaintances the poet maintained over the course of his life, and to observe how adept he was at adopting exactly the right tone and style for every individual he addressed. I’ve found particularly engaging the insights the correspondence allows into what seems a very genuine aspect of Burns’s character – the family man who was deeply fond of his children, siblings and relations, and committed to them both before and after he achieved celebrity status.

When Burns’s father was gravely ill, he wrote to his cousin James Burness in Montrose on 21 June, 1783 to let him know about William Burnes’s condition, and to assure him that ‘it shall not be my fault if my father’s correspondence in the North die with him’ (Roy 1: 18).  This letter is much more than a formal notification. It includes news about farming and the economy in Ayrshire, and thoughtful domestic detail, showing the poet ready to take some trouble in ensuring that ‘a small present of cheese’ from his mother can be safely conveyed to the Burness family in Montrose. On 17 February, 1784 Burns let Burness know that William had passed away and reiterated his hope that ‘my father’s friends in your country will not let their connection in this place die with him’ (Roy 1: 21). Another letter to James Burness exists, sent at the same time from Burns’s uncle Robert, who lived at Stewarton. Robert explained he was then at ‘Lochlie to pay my last respects’ and went on to write of being ‘very frail’. He too asked that ‘a Correspondence should not fail betwixt us in this Country and the relations of our Nativity’. He alluded briefly to his two sons and to his ‘Dauchter at home with her Mother’ (Quotation from MS, courtesy of Writers’ Museum, Edinburgh).

Burns proved true to his intention of continuing to correspond with his cousin, exchanging family and local news with him. During his Highland Tour of 1787 he arranged a meeting with James in ‘Stonhive’ (Stonehaven), and enjoyed being made welcome by other aunts, uncles and cousins. His own pleasure in entertaining his relations is clear from a letter to Burness of 3 August, 1784 about the visit to Ayrshire of a further relative from the north-east, John Caird, whom he described as ‘one of the most agreable, facetious, warm-hearted lads I was ever acquainted with’ (Roy 1: 21).

Burns went further than occasionally being hospitable to members of his family. When his uncle Robert died he gave very practical, long-term support to his bereaved cousins, and assisted the boys in finding work, one of them with Jean Armour’s father. His pride in his young relatives is evident in the brief, vivid sketch of them which he forwarded to Burness on 9 February, 1789:

His Son William, has been with me this winter … His other Son, the eldest, John, comes to me, I expect, in summer.— They are both remarkable stout young fellows, & promise to do well.— His only daughter Fanny has been with me ever since her father’s death and I purpose keeping her in my family till she be quite  woman grown, & be fit for better service.— She is one [sic] the cleverest girls, and has one of the most amiable dispositions that I have ever seen.— 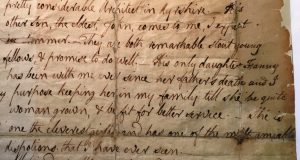 Burns to James Burness, 9 February 1789. With thanks to the Writers’ Museum, Edinburgh for permission to include this image.

Burns’s kindness to Fanny was later verified by Frances Dunlop when, on a snowy winter’s day, the girl delivered a letter from him and took back Burns’s reply. On 24 January, 1789 Dunlop wrote, ‘She will have a cold scramble through the snow; so without your arm she might have had through the world’ (Wallace, 1898: 141). Burns’s unselfish benevolence towards his young cousin remained long in her mind. On 17 July, 1792 she wrote to him praising his ‘warm-hearted, generous kindness to an unprotected orphan girl’ who had been ‘thrown upon [his] care’ (Wallace, 1898: 354)

A touching series of letters between Burns and his young brother William again shows him taking a paternal-style interest, which William himself clearly craved. The boy became apprenticed as a saddler, eventually moving to Newcastle and then to London. He looked to his eldest brother for advice on subjects such as improving his disposition or on how best to conduct a love affair. On 10 February, 1790 Burns warned him away from ‘Bad Women’ since they were likely to be ridden with ‘nauseous and excrutiating’ diseases, as well as ruinously expensive. London, he told him, ‘swarms with worthless wretches who prey on their fellow-creature’s thoughtlessness or inexperience. —Be cautious in forming connections with comrades and companions’ (Roy II: 14). Here he really does sound like a parent worrying about a rather naïve child who has recently flown the nest. He was assiduous in helping William to connect with his former tutor John Murdoch, then resident in the capital. It’s notable that when urging Murdoch to get in touch in a letter of 16 July, 1790, he appeals to family feeling, showing the fond respect for his father evident in many instances throughout the correspondence:

please let my brother know by a card where & when he will find you, & the poor fellow will joyfully wait on you as one of the few surviving friends of the Man whose Name & Christian Name too, he has the honor to bear.— (Roy II: 38)

William looked to Burns not only for moral support, but expected him to attend to practical requests for items of clothing, even hinting to Burns that he should get their sisters to add some decorative trimming to his shirts: ‘for there is no such thing to be seen here as a plain shirt’. This letter of 21 March, 1790 incorporated instructions on getting the shirts and some Ayrshire cheese shipped to him via Edinburgh (Cromek, 1808: 381-3). Burns appears to have complied with the requests, and to have loaned his brother money to help him get established in London. Sadly, William’s life was short. He died of a fever in London on 24 July, 1790.

Burns’s joy in his own children whether legitimate or born out of wedlock, and his attempts to provide for them responsibly, are evident throughout his life. At the present time, with covid-19 still prevalent but mitigated thanks to a successful vaccination programme, it’s very interesting to find the poet writing to Frances Dunlop about having his children inoculated against smallpox, one of the many killer diseases of his day, and worrying about them catching measles. A letter of 7 February, 1791 reveals once again his fatherly pride: ‘As to the little fellow, he is, partiality apart, the finest boy I have of a long time seen.— He is now seventeen months old, has the smallpox and measles over, has cut several teeth, & yet never had a grain of Doctor’s drugs in his bowels.’:

Burns to Frances Dunlop, 7 February, 1791. Copyright of the University of Manchester. Used with permission.

It’s true that on multiple occasions Burns acted selfishly, failing to control his impulses and hurting those closest to him with his infidelities. Yet his correspondence, while not permitting any justification of such behaviour, also reveals much about other aspects of the man, in particular the consistency of his kindness and affection towards so many within his family circle.